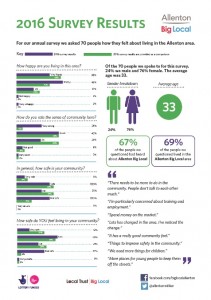 We conducted our annual survey in 2016 to find out how residents feel about living in Allenton and to better understand people’s perceptions of the area.

Of the people we questioned, 67% had heard about Allenton Big Local.

There was a significant change in the number of people that rated the sense of community in the area as very strong (up from 6% in 2015 to 25% in 2016 ). Overall, 92% of residents felt that the sense of community in Allenton was either very strong, good or OK. Whilst this change is very positive sign, we should bear in mind that over 50% of the surveys were carried out at the Christmas event, which may have positively influenced how respondents were feeling about the community.

Perceptions of safety in the area (both general and personal) have also changed markedly compared to the 2015 survey. The percentage of people who rated the area in general as not safe was 33.5% in 2016 (compared to only 15% in 2015). When asked how safe they felt personally, 27% responded not safe compared to only 4% in 2015. Whilst it is not possible to determine the underlying reasons for this change, we can speculate about whether any particular incidents or crimes within the community have influenced residents’ perceptions. We must also bear in mind that we have only surveyed 70 people in 2016, whereas we spoke to 100 people in 2015 (so this may have affected the overall figures).

The respondents who weren’t residents of Allenton Big Local were asked for their perception of the area. 82% of them said that they thought it was either fantastic, good, or OK.

Finally, we asked respondents which of the three Allenton Big Local priorities they agreed with. 74% supported the Creating Opportunities for Training and Employment priority, 71% supported Strengthening the Community, and 68.5% supported Improving Life Skills.

You can download an infographic showing the survey results and some of the comments from the survey here.