Allenton Big Local was one of several local organisations and groups to support the OSCAR Tracks BMX Event that took place at the Cotton Lane BMX Track on 31 August. The event was a chance for young people to bring their bikes along to use the tracks and take part in some of the other activities available on the day, which included inflatables and refreshments which were funded by Allenton Big Local.

The Police were on hand to advise on bike security. Thirty new bikes were security etched on the day and the owners were each given free locks and lights. 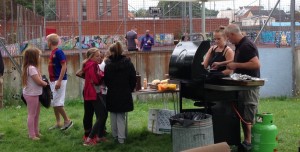 Around 130 young people attended the event, which was organised by Derby Homes working in partnership with Enthusiasm, OSCAR and Cycle Derby. Jo Solbe from Derby Homes said: “It was great to see the young people connecting with their tracks in such a positive way and taking real pride and care in the maintenance of their bikes.”